DEDICATED TO THE HEART RHYTHM AND IN LOVE WITH THE MUSIC RHYTHM: DR. ANTOV IS ONE OF THE FAMOUS DRUMMERS IN THE COUNTRY

He was a child who trembled when a soldier of the military orchestra allowed him to try the drums at the Army Hall, next to the then Republic Assembly – before and after the performance. His love for this musical instrument is immense. It was so sincere and great that even today Dr. Antov, now a famous cardiologist, speaks with special excitement about his hobby – rhythm and drums. He was young when he felt the music as necessity. At elementary school, at the age of 11, Dr. Slobodan Antov participated in the school choir. It was thanks to his teacher Olga Bjelica, he recalls. He says she brought him into that world without limitations. Later, as a member of the choir, however, says the doctor, he was still not aware of how important music education is for a person – for the formation of the person as a social being. But to this day he is a passionate drummer. One of the famous drummers in the country. He has spent a lot of time with the drums – bought a few – played with great passion. And it still lasts.

FIRST DRUMSTICKS, DESIRE FOR A DRUM

At that time, i.e. at the age of 12, Dr. Antov had his first contact with drums. He says his older brother and sister listened to the music of Mantovani, Paul Mauriat, Franck Pourcel. “I would single out George Gershwin from this period, who especially impressed me. From the domestic performers I listened to Radmila Bakochevikj, Zhivan Saramandikj, Zdenka Kovachichek and many other authors and musicians. During a performance at the Army House, near the National Assembly, where we performed with the choir, a drummer allowed me to sit down and try to play the drums before and after the performance, after noticing that I was constantly watching him. It was 1973 when the story began”, says Dr. Antov. He bought his first drumsticks in a store near “Rekord” – “Muzichki magazin”. Later, his drumsticks were often made by carpenters. At home, he says, he usually practiced when he was alone, but using makeshift drums. Most often he used pieces of furniture and decorations, such as crystal vases, to serve him as drums. “I was trying to follow what I was listening to on the radio, on a gramophone, a tape recorder, a cassette player. During one of my summer vacations in the place called Slano, near Dubrovnik, in the hotel ‘Admiral’ the group ‘Time’ had a performance and their drummer gave me the drumsticks with which he performed, which additionally motivated me”, says Dr. Slobodan Antov. 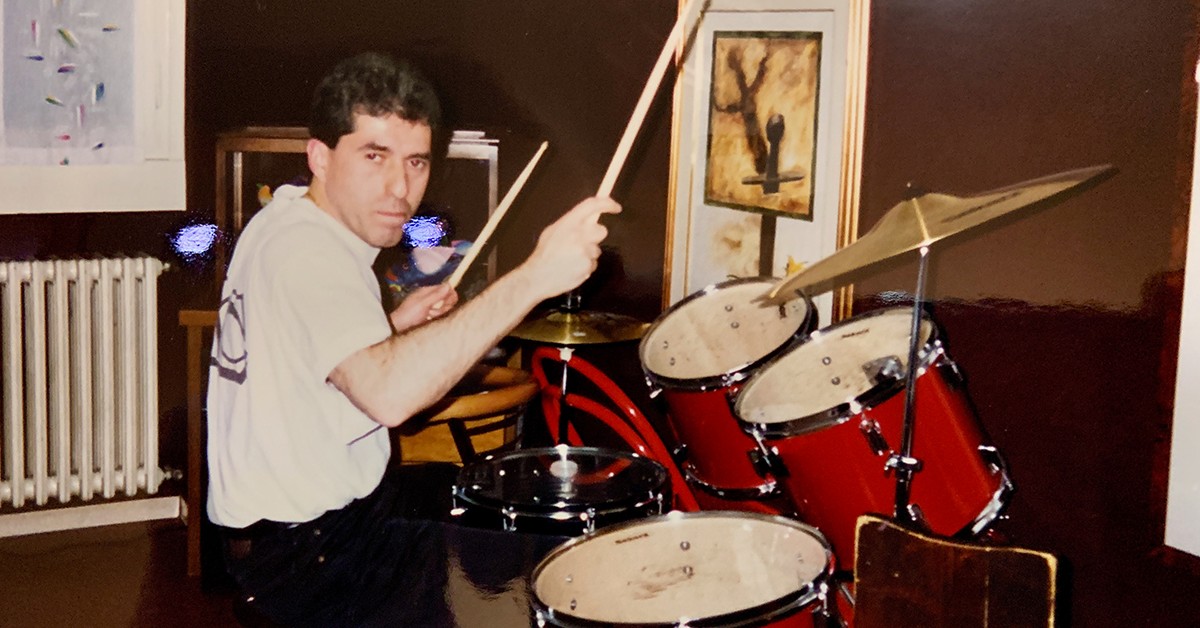 ALL THE SECRETS OF THIS INSTRUMENT

A special part of his love, a special period of his life is the moment when he received the drums. He says it happened after five years of pressuring his parents and family, and after a few broken vases. “It was a Tacton kit with 4 elements and two cymbals. The first thing I tried was to tune them by ear and see how complex this instrument is and how many secrets it hides. My drums were placed in my grandmother’s room, who always supported me in this wish of mine”, says Dr. Antov. He adds that at that time his special album was “When the eagle flies” by the band “Traffic” from 1974, with Steve Winwood and Jim Capaldi on drums. That sound carrier became his musical basis and he listened to it countless times. However, as he says, unfortunately, he never managed to attend their live performances or a performance of the members of this band. He also listened to Carlos Santana, i.e. the album “Caravanserai” with which he practically saw what a great rhythm section can do. Drummers and percussionists Jose Cepito Areas, Michael Carabello, Armando Peraza and James Mingo Lewis, who played on the album, he says, were simply out of reach for him. “It made me realize that I lacked music education and a basis to pursue this hobby of mine. I first started learning as much as I could on my own. Drums and percussion instruments are not at all easy to master. I started learning to read notes, to master the basic musical structures. I used every free moment to exercise, longer and longer, especially after we moved to live in a house and when I got great conditions to exercise in a separate room, and at the same time not to disturb people around me. In order to check my knowledge, I registered for an exam for a pop artist, which I passed easily and that gave me the confidence to continue “, says Dr. Antov.

THE DRUMS OF AC/DC’s DRUMMER

Then came performances. At that time, in clubs, which were mostly in basements, discos and pubs, but also in the “Amusement Park”. Dr. Antov also played at celebrations and weddings. His goal was to save money to buy new, better and bigger drums. He was doing it discreetly at first, without much publicity. That’s how he succeeded. He saved enough and in 1981 went to Stuttgart to buy his first professional drums. These are drums “SONOR” from the series “Phonic” with cymbals “Paiste” 2002, Sound Edge 14″ Hi-hat, 2002 Medium Crash 20″, Crash 22″, Splash 18″ and 602 Flat Ride 22 “, Cowbell. At the time, such a drum was played by Phil Rudd, AC/DC drummer. “In order to learn the Macedonian rhythms, I went to listen to the instrumentalists in KUD “Vlado Tasevski”. At that time, through my parent, who knew Dragan Gjakonovski-Shpato, I received materials, i.e. audio recordings from Buddy Rich, Elvin Jones, Philly Joe Jones, Jack DeJohnette and other jazz drummers. But even that was not enough. Through my relative I got in touch with Garabet Tavitjan-Garo, who selflessly came to my home to show me how and what to practice. I regularly attended the rehearsals of “Leb i Sol”, wherever they took place, whether in MKC, the barracks at the Faculty of Mechanical Engineering or the City Shopping Center”, says Dr. Antov. From the domestic bands at that time, i.e. the end of the 60s and 70s, he says that he would single out “Time” where Dado Topikj played, and the drummers were first Ratko Divjak, then Petar-Peco Petej, “Smak”. From the live performances of the Macedonian popular bands of that time, as well as from the Yugoslav territories, Dr. Antov singles out the performance of “Azra” with Boris Leiner on drums in the Youth Center “25 Maj”, now MKC. Macedonian bands with the strongest influence, which were an example of good music, were “Leb i Sol” where Garabet-Garo Tavitjan played on drums, and later “Den za den”, i.e. Dimitar Chochorovski on drums, then “Pu”, “Bis bez”. 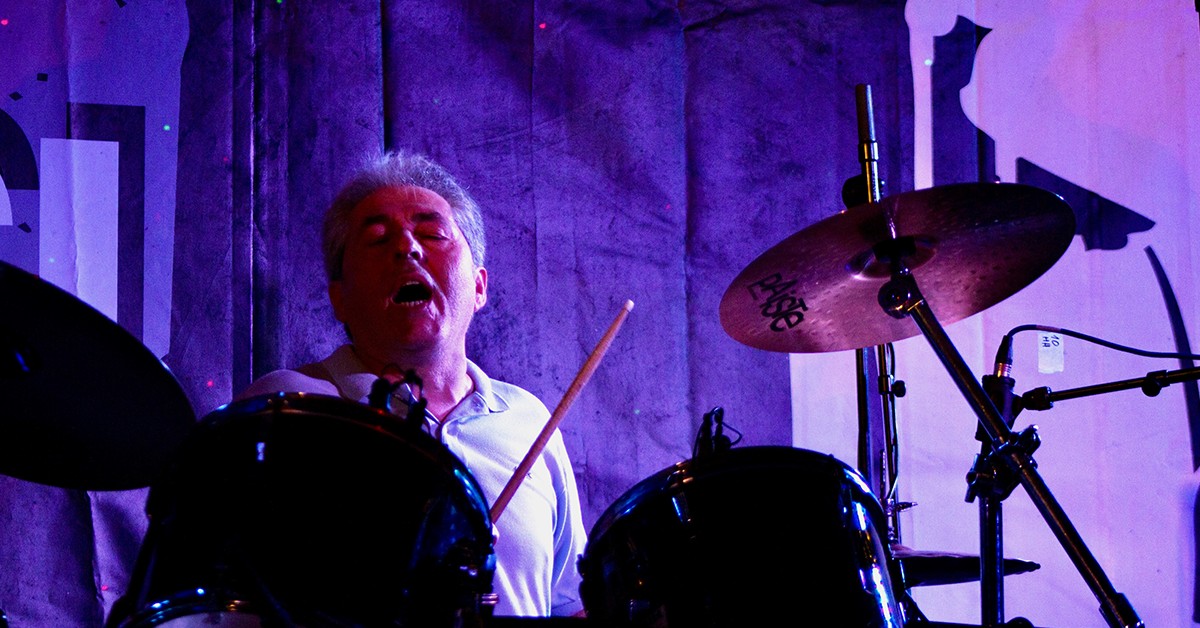 Then came the period when he thought of playing in a band. “After a ‘Leb i Sol’ rehearsal, while they were preparing for a tour, Aleksandar Dzepovski approached me and offered me to be part of a group that we later called ‘Penicillin’.” In the beginning, members were Aleksandar Dzepovski – bass, Venko Serafimov – guitar, Lazar Strezov – guitar, Sejat Jakupi – singer, Zoran Pehchievski – keyboard and me – drums. It was my first contact with self-produced music. Enthusiasm predominated then, so we had the rehearsals even in Vizbegovo. After the split, when two members remained in the “Penicillin” and three formed “Konkord”, I joined “Usta na usta”. Then another great wish of mine came true, to enter the studio and record. It was a new and very important experience for me “, says Dr. Antov. Live performances followed – at Sajmishte, Ohrid. Positive anxiety and adrenaline before the performance cannot replace anything. Drummers are always in the background, but with their solidity, precision and inventiveness they can really stand out. From this perspective, I think I have managed to achieve that on many occasions”, he said. However, the time came when he had to decide whether to continue with the determination to be, as he says, a “heart doctor”, because his sister had already been learning that. He devoted himself to medicine and took a break from the instrument from 1988 to 1999, until his one-year working stay in Bergamo, Italy, where he met a priest – an abbot who wanted to learn to play the drums. After contacting him, he managed to have two or three performances with their musicians and one performance in the local cathedral. That experience, says Dr. Antov, is impressive and cannot be described in words. After two or three years, he bought electric drums, first “D-drum”, and then “Alesis”, on which he occasionally played what he wanted and with whom he wanted. LOVE THAT LASTS and does not end here. In 2014, Dr. Antov started playing again, bought acoustic drums again. “Premier” with “Zildjian” cymbals, “Istanbul Mehmed” and “Agop”, “Mainl” and “Masterwork”. He also received a set of “Tama” as a gift. In the period from 2014 until now, he has been actively rehearsing with the band he plays with (“The Brothers Band”). They have performances here and abroad. Regarding the band’s repertoire, he highlights one of their adaptations of the folk song “O devojche ti tetovsko jabolche”, also known as the Turkish folk song “Kâtibim”, or “Üsküdar’a Gider İken”, which is performed in more than 26 countries and in multiple continents. The doctor says that he likes to go to performances and enjoy music. “When I go on trips I also use the opportunity, if time allows, to relax in the evening with a live performance by a band. Each new experience inspires me, calms me and motivates me to dedicate more time to this hobby of mine. Sometimes I spend a few hours a day listening to music and trying to fit in with the drums. Music calms, develops aesthetic feelings, encourages positive emotions, good behavior, creativity, independence, teamwork and responsibility, and develops intellectual functions”, says Dr. Antov. He also listens to classical music, mostly Tchaikovsky, Chopin, Vivaldi, Bach, Beethoven, Schubert, Verdi.